Last Friday evening in Maine Arlene heard a loud noise that we couldn’t identify. Half an hour later I looked around the house to investigate. Oops! Should have checked right away. There was two inches of water in the middle of the garage. The pipe leading to the outside faucet had frozen and burst from the below-zero cold outdoors.

I turned the pump off. There would be no more running water in the house until we got the pipe fixed, because there was no way to turn off just the broken line. We unhooked the garage door from the automatic opener (that was something I hadn’t done before, but it’s super easy to unhook and reattach) and pushed the water out of the garage with a big broom and a snow shovel. That’s easier said than done, and remember that the garage door was at least partly open in the cold. Arlene had made lots of phone calls. Porky, who had done the new roof a year and a half ago, said he’d come over at 11:30 the next morning and fix it. I tore out enough of the sheetrock to get access to the pipe, and pulled out the fiberglass insulation behind it in the meantime.
Here’s the whole story, in pictures, except that we neglected to take a picture of the flooded floor and the water removal process. 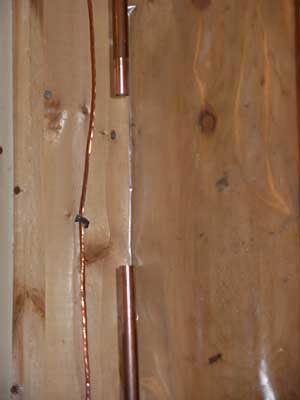 That’s where the pipe burst. Although the hole is just an inch long, Porky said it’s important to cut out several inches on either side because the pipe is weakened near the break, and if you don’t cut out enough pipe it will just break again two inches from the original break. 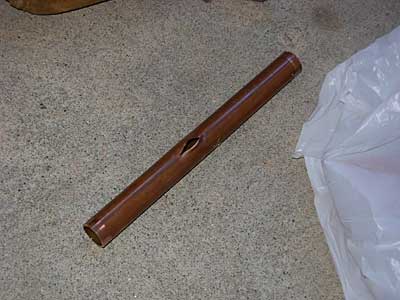 That’s the broken pipe. That’s where all the water on the floor came from. 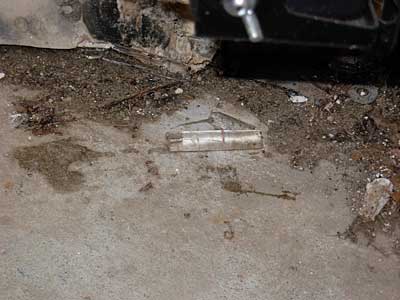 Even though the pipe was exposed to the (somewhat) warmer air inside the garage overnight, there was still ice inside the broken part.

Here’s one of the pipe couplings being soldered on. Porky’s girl friend is holding the pipe. Arlene was watching her daughter, who had come along. 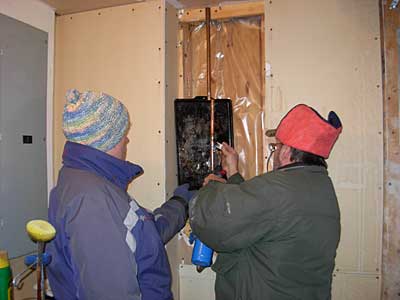 I was wondering how you use a torch on a pipe inside a wall without burning down the house. The answer: bring a cookie sheet along as a heat shield.

Porky left several more feet of pipe, a coil of solder, a container of flux, the pipe cutting tool (which he showed me how to use as he was cutting out the bad section) and the cylinder of propane for us to hang on to. Of course, they were materials, as in “labor and materials”, which he charged us for. “If you’re going to live in Maine, you have to have some spare pipe in your house,” he said. “If you had had the stuff, I would have come right over last night and fixed it. As it was, I had to go to the hardware store, and it wasn’t open then.”