Two of the less common birds we’ve seen this week are uncommon precisely because they shouldn’t really be where we’ve seen them. Thirty or forty years ago they were out and out rare in Massachusetts. By now they’ve extended their range northward (presumably as the climate is getting more to their liking farther north) so they’re not a big surprise to see. 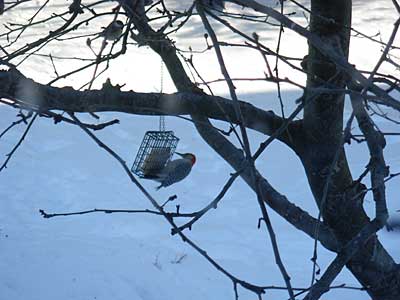 This one is a red-bellied woodpecker. When Arlene and I were new birders, we made a trip out to South Natick just to look for a red-bellied woodpecker that was listed on Massachusetts Audubon’s “voice of Audubon” phone answering machine, which at the time was the usual way to find out about rare birds in Eastern Massachusetts. Granted, South Natick is just two towns away from Newton, but still, it was a rarity at the time. We saw one in Chatham on Cape Cod several years later, when they weren’t so rare in Massachusetts but when the sighting was still memorable. Four or five years ago I was still pretty excited to see one most every day that I walked in Prospect Hill Park. This one is at a suet feeder in our heritage apple tree in Maine. Notice that on the range map on that page I linked Maine is not colored purple? This bird has less business being in Casco than anywhere in Massachusetts! A red-bellied woodpecker was reported on the Maine Audubon rare bird notice a month ago in Otisfield, the next town north of us. Arlene thought she had seen one across our driveway the weekend before last, but we didn’t get a positive ID that time. This may be the same bird, and I wouldn’t be surprised if it’s the one that was seen in Otisfield. But there’s no way to know. By the way, take another look. Besides the woodpecker on the suet there’s a chickadee in that picture. 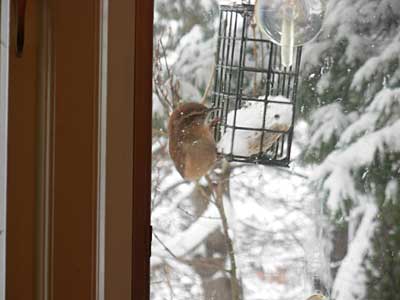 This one is a Carolina wren, at our kitchen window in Newton. They’re more common than red-bellied woodpeckers, but still uncommon. One of the best-known birders in the Boston area is trying to see a Carolina wren in every town in Massachusetts, and he’s most of the way there. There are enough of these birds around to make it likely that he can do it, but still few enough that it’s a challenge.