On Tuesday evening instead of our regular meeting of the klezmer class we performed in a concert at Hebrew College. It turned out to be more like a Hanukah party for Prozdor, the high-school program of H. C.

We had expected that there was another group on the program, the Prozdor klezmer band, directed by Glenn Dickson. Glenn had directed the JCC klezmer band for the first ten or fifteen years it existed, so I’ve played under his baton (well, metaphorically; I don’t think he ever used a baton. Mostly he played clarinet along with the group) a lot. It turned out that in addition there was a third group, consisting of younger home-schooled kids, also directed by Glenn. Pretty good idea — you’re home schooling your kids, but a school orchestra or band is a part of the curriculum you want to have, so get together with other people and hire a music teacher.
The concert was in Berenson Hall, where Koleinu used to rehearse and occasionally perform. It’s a big beautiful room but has funny acoustics; the front half has a very high ceiling and the back half has a normal-height ceiling, and the sound sometimes doesn’t make it very far past the dividing point.

The place was packed. I got the feeling that all of Prozdor and many of those kids’ parents were there. I stood while the other two groups played, and many people were standing in the back of the hall.

After we said the blessings and the people in charge of the program lit Hanukah candles and we all sung Maoz Tzur (Hebrew texts all power-pointed to the screen in front) the home school group played three songs. They were all young kids, between seven and thirteen years old, so it was a little like an elementary school orchestra concert, but strangely heavy on violas. Here’s Glenn directing them: 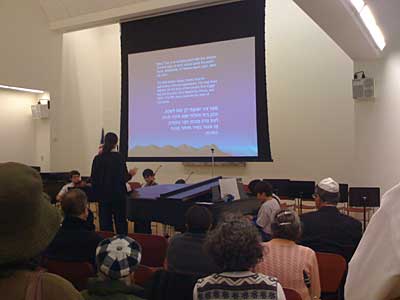 The clarinetist seemed to be having some trouble with his instrument for the first song, and I wondered if he knew which side was up, but he was right there on the second song, playing little ornaments as well as the tune, much better than I’m likely to be a year from now. The pianist was energetic and enthusiastic, as well as playing the right notes, so all in all the group wasn’t bad. I recorded one of their numbers, but didn’t catch the town in the song’s title. A few weeks later I emailed Glenn to ask the names of the tunes, so this post is updated with them. The tune is “Boyberiker Khasene”, “The wedding in Boyberik”.

I also recorded two numbers the Prozdor group did, partly just so I could learn the tunes. It was a bigger group, maybe 18 kids, including two trumpets, at least four clarinets, and two flutes. I guess a few violins too, a piano, and the drummers were absent.
Here are the songs from the Prozdor group: “Dem Rebns Tantz” (“the Rabbi’s Dance”)and “Der Zeyde mit der Bube” (“The Grandpa with the Grandma”). That sounds like a song that was played for a specific part of a wedding (or less likely bar mitzva) celebration, “OK, now let’s give the parents of the bride a chance to dance.” There are a bunch of klezmer tunes like whose titles are just descriptions of the function, such as “Fun der Khuppe” (From the khuppe, i.e. the recessional after the ceremony) and “Faren die machetunim aheim” (escorting the in-laws home).

The third number the Prozdor group did was a trumpet doina, which is a slow piece with a soloist. I was very impressed with the solo trumpeter.

The JCC klezmer band only got to play a third of the program we had prepared when the people in charge of the program told us that time was up. Kids were going to be picked up at that time, and we just did one more number, with all the musicians together. The prozdor trumpters sat behind me and said, “hi, we’re the trumpets.” I had been playing baritone horn on the last number my group did, so I said, “since you’re here I’ll stick with the lower brass.” We did hang around for a few minutes after the party broke up and played Tumbalalaika and Hava Nagila. All in all it was fun, though a little disappointing that we didn’t get to do our whole program.

One reply on “Concert at Hebrew College”