I spent a lot of the Fourth of July weekend with my baby chestnut and hazel trees.

The first order of business was to go out to the planting site with the string trimmer and clean out the area. There were lots of ferns growing there, as well as plenty of wild brambles and sweetfern and beech seedlings and sprouts. Then we raked the area to remove at least some of the chopped up weeds. By early afternoon we were ready to plant the seedlings.

I had labeled wooden plant markers that we got from Paris Farmers Union, about the width of tongue depressors but thicker, twice as long, pointed on one end, and bright orange, with the kind of plant and the date. We set them out where we wanted the plants to go and then got busy digging with a mattock and trowel. We dumped a timed-release fertilizer pill and then a trowelful of humus/manure (I had trundled the 40 pound bag of that as close as I could in a wheelbarrow, and carried it the last hundred feet) in each hole, set in the tubeling, filled in the hole, and watered. By suppertime we had planted all ten chestnut seedlings and all 22 hazels. 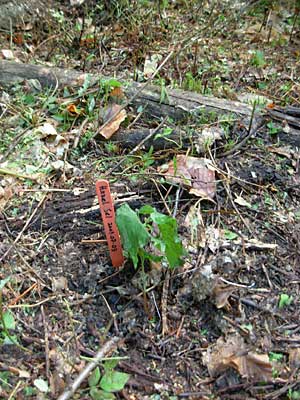 I was tired, sweaty, and dirty by the time we were finished. And this is after brushing the bits of weeds from the string trimming off my shirt: 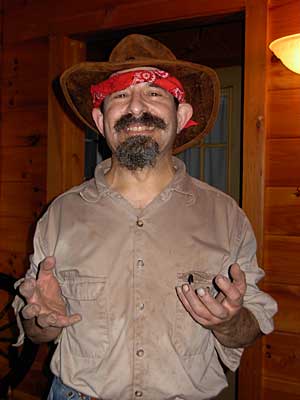 It was rainy a lot of Saturday so I didn’t do much more with the trees then, but on Sunday I went back and marked off the seedlings in little squares of surveyors’ flagging tape, because I don’t want to step on them by mistake and they’re not particularly conspicuous at this stage. 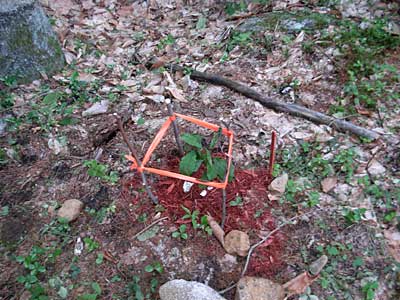 By now the whole area looks sort of like this: 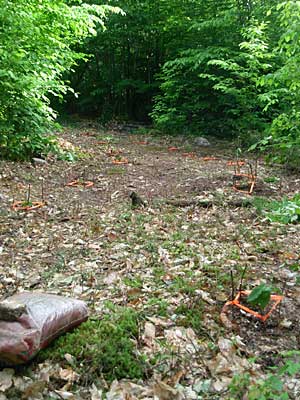 Now all I have to do is water the plants once a week for a month or two, sprinkle some fertilizer in a circle around each, keep the weeds down, and wait five or ten years.

One reply on “Hazel and Chestnut orchard”