Recently the shower in the bathroom off our bedroom has been dripping from the pipe above the shower head. I was a little concerned that it might be getting water inside the wall or someplace it’s a real problem, so for a couple of weeks I’ve been showering in the other bathroom. Finally last night I had enough free time to look at the place that’s leaking. It’s a piece that connects the supply pipe with a pipe down to the shower head, and it turned out to be cracked. The leak didn’t have anything to do with the pipe in the wall, but the cracked piece needed to be replaced.

I was able to buy a replacement part today; it’s called a head bracket (as in shower head). Here’s the story in pictures.

Here’s the rough pipe coming into the shower, with the broken part and the shower head removed. The replacement part has to be threaded onto it. Yes! I suspect your shower has something about that ugly behind the chrome parts. 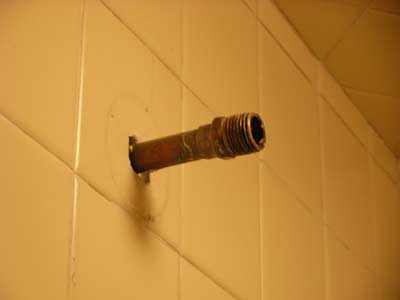 Here are the old (left) and brand new (right) shower head brackets. You may have to take my word about the cracks, or use a little imagination to see them. 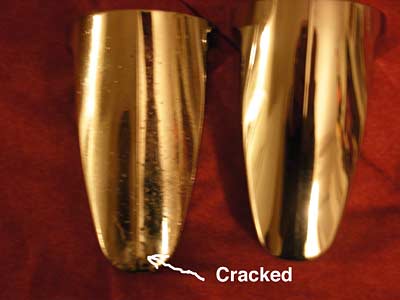 On the left below is a roll of teflon tape, or TFE thread seal tape. If you have any plumbing work to do (other than soldering copper pipe together, which I don’t know how to do, or glueing PVC pipe together, which I don’t know how to do either) you should know about teflon tape. It’s very thin, no more than half as thick as scotch tape and probably a quarter as thick. You wrap it about three times around the threads you’re putting together and tear it off. When you put the parts together it fills in any tiny gaps between the threads so the joint won’t leak. Better yet, the two parts have teflon between them so they won’t corrode together if you need to take the joint apart twenty years later, as I had to here. 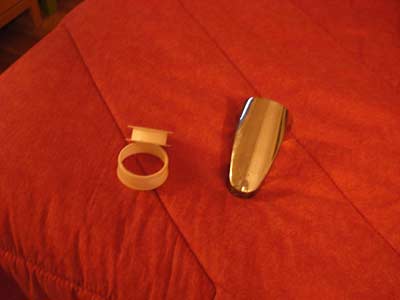 Here’s the shower put back together. You can see the tape around the joints (but one joint is up inside the head bracket so you don’t see it. 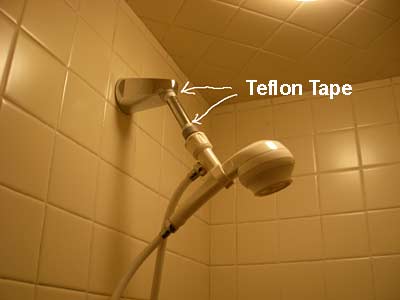 I haven’t turned the water on yet. Ask me if it has stopped leaking tomorrow morning.