The last active Shaker community is 15 miles from our house in Casco. In the summer they have a series of demonstrations and workshops in traditional crafts.

We went over this afternoon for a demonstration of wood turning, which was presented by (just so you know, this is a Tripod link) Peter Asselyn of Durham, ME. 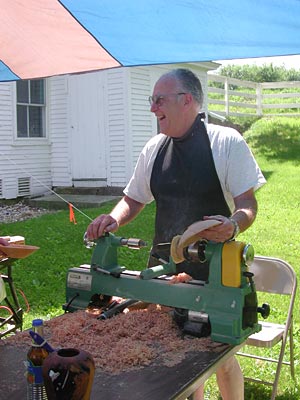 Well! It was just a demonstration, but I couldn’t have hoped to learn more from a workshop (except for getting hands-on time myself, I guess). We were the only people talking to and watching Mr. Asselyn turn half of a bowl, so it was almost a one-on-one lesson. When we got there, he had the base of the bowl in a chuck and was sanding the inside. While we watched, he put a padded disk in the chuck, fit the bowl between the tailstock and the pad, and did some finishing cuts on the outside; cut off the foot which had been in the chuck when we got there; took the remaining nub off with a chisel, with the bowl off the lathe in his lap (and the chisel pointing toward himself! I want a really heavy shop apron before I try that!) and rubbed the bowl with walnut oil (straight from the supermarket) to finish it. 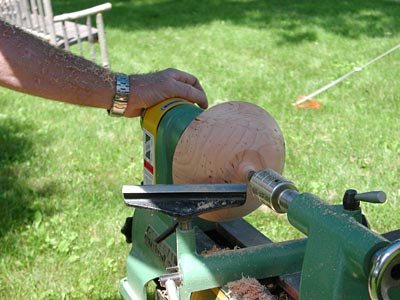 All this time I was asking questions and he was explaining what he was doing, showing me the subtleties of sharpening the bowl gouge and using both sides of the bevel on the blade for cutting and polishing the bowl, telling me about what tools are needed, recommending that I look up the American Association of Woodturners and discussing lathes in general.
And then, he gave the bowl to us!