Arlene had left the outdoor light on the deck (in Casco) turned on. Around 11:30 she looked at the screen door and hollered, “Look! There’s a luna moth on the screen!” There was, and better yet, when we looked, there was another one flying around outside. We took a flashlight, went out the front door and around to the deck to see them from outside, and there were more! We counted six luna moths, on the side of the house, on the deck, on the screen door, and flying around. “That’s more than I’ve ever seen in my life, all put together!” said Arlene. 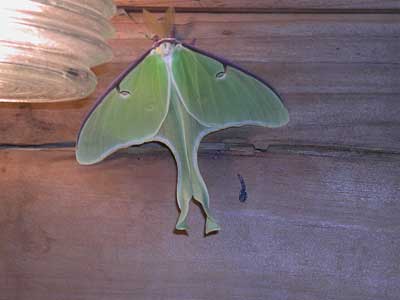 We tried to remember when we’ve seen them before — at Marie’s house on a lake north of Orono, during the week after the end of school; at Tregelly Fiber Farm on the way home from my college reunion in June last year; at the Whitcomb Summit motel in the Berkshires the week after the fourth of July. So as far as we know, the latter half of June and first half of July is the season for them in this part of the world. 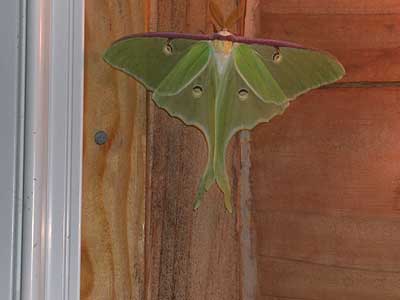 One reply on “Luna Moths”