The sign we had seen advertising Maine Maple Sunday was at Harvest Hill Farms farm stand on Route 11. We had stopped there just as they were closing the first time we drove home through Gray, just in time to get some delicious maple hard candy. Their farm is up Megquier Hill Road in Poland. It’s just a few miles from where we were, and we wanted to check it out.

It’s a much bigger farmstead than Sweet William’s, with fields, sheep & llamas (and I think that’s a steer in front of the sheep and llamas – obligatory sheep photo for knitters), chickens, and old apple trees. 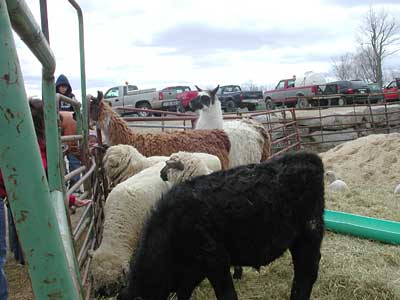 They have a 3000 gallon per year syrup operation that hasn’t done as much this year as they’d like to. The road past the farm is lined with maples with galvanized iron sap buckets hanging from them, and a magnificent view over Tripp Pond. 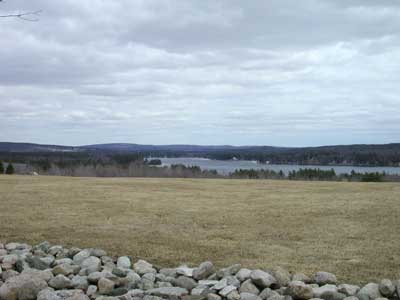 They were set up with a big tent, hayrides, their own pancake breakfast, and live music — a string band which allowed me to get a good close look at a dobro in action. Hey! This guy on the left front is playing the guitar left-handed. I hadn’t even noticed until now. We got some more of those hard candies and some soft maple sugar candies, and tasted maple fudge, delicious but more caloric than I need. 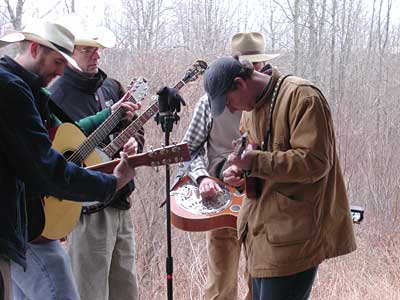 So in summation, if you want to learn about maple sugaring, you can see more of that at Sweet William’s. If you have kids who haven’t spent enough time on a farm, they can see more animals at Megquier Hill, if you don’t mind a little walk down to the festivities. 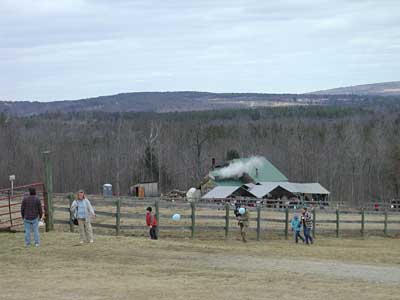 Either way you can get all the maple syrup you want. And there are probably another twenty places to go elsewhere in Maine next Maple Sunday.

Say! This page on the Cornell web site looks as if it has all the links you’ll ever want about maple sugaring.