Maine Maple Sunday is a regular event on the fourth Sunday of March, which is usually at the peak of the maple sap run. Besides pancake breakfasts sponsored by every organization that has the energy to do them, maple sugar farmers around the state set up tours of their operation and try to attract the public to sample their goods. It’s a chance for the farmers to sell syrup at retail, too, before they have to find a middleman to take it at a lower price. Of course that means the public gets to buy it at a better price than it will be at farm stands or, heaven forbid, supermarkets.

The only open sugarhouse we found in Casco proper was just down the road from the Webb’s Mills community center, off route 11, well marked with hand-painted signs. The family who had left the pancake breakfast right behind us pulled their car up and parked right behind ours where people seemed to be parking for the sugarhouse. This is parking along the side of the road, not to get in the ditch, right? No parking lot in the picture. Not sure how much farther down the road we have to walk to get there, but it seems to be where people are parking.

Down the driveway was a table where someone was just trying to get a count of visitors by having each person take a penny from a bowl and drop it into a jug.

Down the hill from there was the crowd, around the sugar house. 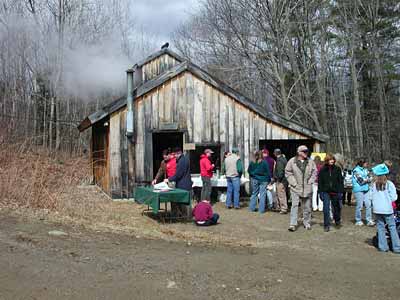 Serious maple syrup making always deserves a building of its own. It takes 40 to 50 gallons of sap to make one gallon of syrup. That means you have to boil away 39 to 49 gallons of water to make one gallon of syrup. That makes a lot of steam — see the water vapor coming out the cupola of the sugar house? That’s why a sugar house always has a cupola like that. Sure you can boil sap on your kitchen stove, but you’ll have to have all the windows open, and even so you’ll probably steam the wallpaper off the walls before you’re done.

The last time we were in a real sugar house was probably 20 years ago. There was a big pan for sap heated by a wood fire. This one has a nice shiny four-year-old oil-fired boiler with electronic controls. 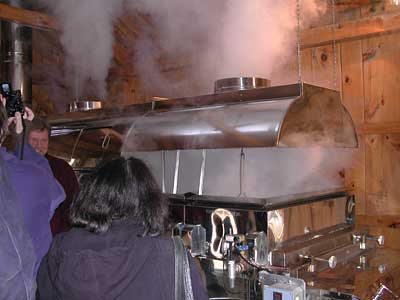 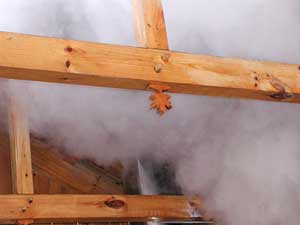 All that boiled-off water is going out the open cupola. 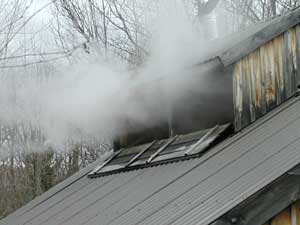 Here’s an old syrup boiler, atop a wood stove made from an old oil drum. Just like in the song “More Wood” that the Short Sisters sing.

He took an oil drum, and welded
some piping from the septic tank,
and fore and aft he cut a draft
and then he made a damper crank
with an old broom from the back room
and painted it fire-engine red
and said, “Now watch it consume
your wood …”

That thing that looks like a tank of helium to the left? A tank of helium. There’s face painting and helium balloons and animal twisty balloons going on here. It’s a whole party! 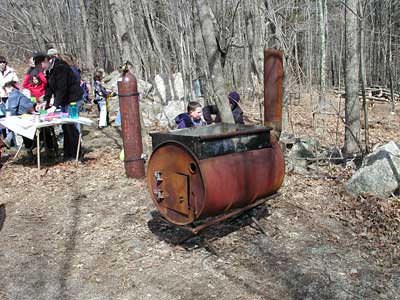 If this isn’t Sweet William himself, it should be. (Angelenos, this is a warm March day in Maine, temperature in the 40s. He’s dressed for the weather as befits someone who has spent a lot of time outdoors here over the past month.) He’s explaining the whole maple business to the grownups. On the table are old and new spouts that go in the tapped trees, plastic tubing and connectors, an old-style sap bucket, and tools for tapping trees, from an old hand-operated brace and bit through a gasoline-powered drill to a cordless electric drill. He also had a cross-section of tree that had been tapped, to show us how the tree heals over old tap holes. 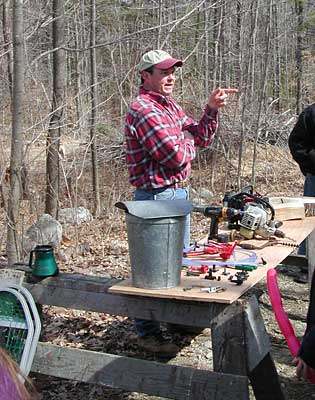 Some things he said:

He’ll be able to tell you if it was a good season or not at the end of the season. He likes to make 500 gallons of syrup in a season. As of this morning he had made 265, 15 in one good day. In previous years people have said, “There was lots of snow this year, it’ll be a good year for sap” and it was a terrible year, or “It was too warm this winter, it’ll be a poor year for sap” and it was a good year. So he doesn’t try to predict.

Vermont is still the leading state in the US for maple syrup, ahead of Maine by about a ratio of 4 to 3. (Could it have been 400,000 gallons for Vermont to 300,000 for Maine? maybe) The Province of Quebec is way way ahead, though. His new boiler comes from Quebec.

He uses a vacuum system to pull the sap along the tubing. You can’t suck sap out of a tree, but you can encourage the sap to come along.

Trees need light to produce the sugar over the summer. He thins out his sugarbush so the trees aren’t too close together. It’s just like weeding a garden, except he does it with a chainsaw rather than a hoe. 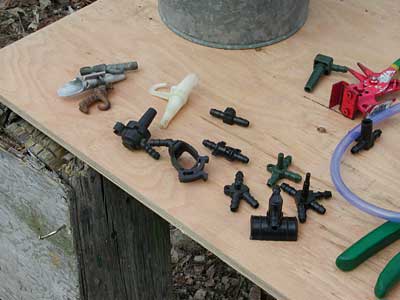 Here’s a close-up of that table. On the far left is an old metal tap. It gets hammered into the hole you’ve just drilled into the tree, and the bucket hangs right on it. There’s a newer white plastic tap with a molded-on hook for a bucket. Then you get to current technology, all those black plastic fittings for the tubing.

OK, folks, walk down that way to see where we collect the sap.

There’s a modern tap in a tree, connected by plastic tubing to a vacuum line and a main collecting tube. Blue seems to be the standard color; at least, now that we know, we’re seeing those blue lines in the woods every now and then.

In another building is the vacuum system, a 300-gallon tub for collecting the sap, and a pump for pumping the sap up to the sugarhouse. They have 1600 sugar maples tapped.There are two collection chambers; when one fills up, the vacuum switches to the other and the first drains into the tub.

The guy who was talking at this part of the tour (no picture) said that mapling was a disease. Sweet William had crossed over to stage six, at which point it was terminal, with the installation of the vacuum system. Now he was talking about a reverse osmosis system, which gets him to stage 7.

I don’t think I had ever seen the sap just as it comes from the tree. It’s almost clear, just a little cloudy. 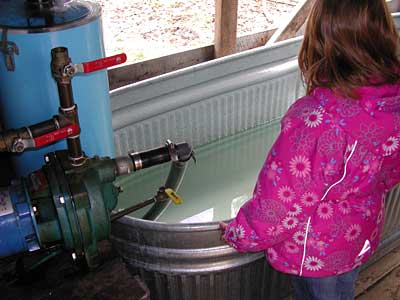 Back up the hill at the sugarhouse, you could taste samples of what you can do with maple syrup: cook baked beans in it, serve it over vanilla ice cream (donated by Ben & Jerry’s, thank you!), dip fried dough in it. People who make their own maple syrup use it a lot more freely than those of us who have to pay nine dollars a quart or more.

There was a sales table where you could buy syrup in plastic jugs, from a pint to a gallon, or in glass bottles with a picture painted on the front, suitable for gifts. Also maple-syrup glazed popcorn. Here’s the funniest application, I think, and you’re not going to find it anywhere but at a Maple Sunday open house: maple cotton candy! Yes, fans, that lint on her vest is pure maple sugar lint. 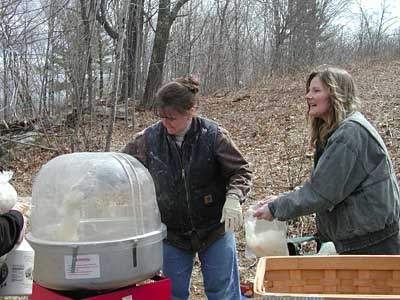