I had a letter to the editor published in the Boston Globe today!

[supplied by the paper] The ‘broken window theory’ works both ways

[my letter] In the discussion of the Ferguson and Staten Island police behavior, I’ve seen a lot about the “broken window theory” — the notion that, since small nuisance offenses change the public attitude and make the public less law-abiding, being tough on minor offenses reduces significant crime as well.

I would like the police to recognize the opposite side of it: Any overreach by police reduces the public’s respect for police and willingness to cooperate. This goes for unnecessary traffic stops, an “accidental” blow in the course of making an arrest, and any other, more minor excess. It’s the same psychology, people. 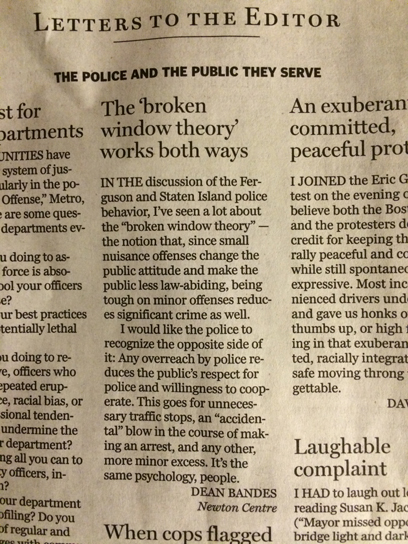