We drove up to Casco on Saturday morning rather than Friday evening because of the storm. In Newton it was just rain on Friday and had cleared by midafternoon, but farther north there was sleet and freezing rain, the storm was continuing later into the evening, and there were warnings of slick roads. What we didn’t want was to get to Casco at ten thirty at night and find that we had no power and therefore no heat.

We stopped first at the Costco in Danvers (we went past Waltham ten minutes before the store there was going to open) and got a clock radio with an iPod dock so I can wake up to music from the iPhone as well as keep the iPhone charged. Also a set of cordless phones for Maine, where it would be really nice to have a phone we can take outdoors.

We got off the New Hampshire stretch of I-95 at the tolls and went up the coast, hoping to see some sea birds. We didn’t see birds, but there was heavy surf after the previous day’s storm. Spray was flying over the seawall in Hampton. We stopped to look out over the water in a couple of places, but the surfers(!) seemed to have scared the ducks off, and the chill wind drove us off quickly too. 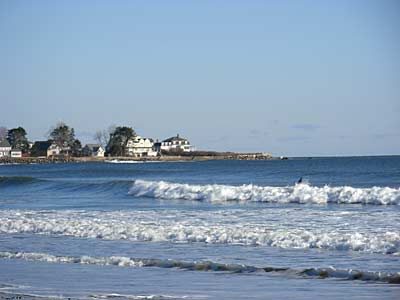 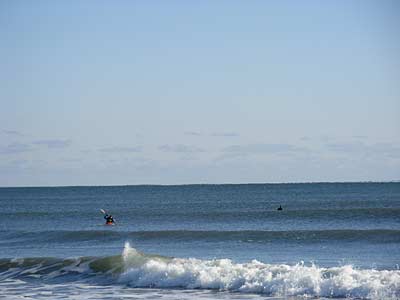 There’s a bridge under repair on route 1-A near Portsmouth, so we followed a detour back to the main highway. Multitudes of tree limbs were down — we hadn’t been seeing them along the coast, probably because there aren’t trees along the road there — and we had to stop for a policeman directing traffic around a downed power line.

It was early enough that we thought we could stop at Crate and Barrel in Kittery. We got off at exit for the outlets. The traffic light just before Kittery Trading Post wasn’t working — no power. Suddenly it looked as though we weren’t going to Crate and Barrel. I pulled into their parking lot, but the store was dark and there was a sign on the door, “closed – no power.” We were ready for a rest room stop, but the highway rest area at mile 5 was also closed, no power. We continued to the Kennebunk rest area, hoping that either power was on there or that the brand-new (or year-and-a half old) rest area would have been built with some backup power. Besides the rest rooms, we were concerned about the gas tank. We had left Newton with almost a full tank, but not enough for a round trip. If no gas stations in Maine were going to be pumping gas, we would be in trouble.

The lights on the gasoline price sign at Kennebunk were on, so we figured the power was on there. We and the car left the rest area feeling much more comfortable and confident.

Next stop was the Portland Art Museum. Portland had the power on. There was a show we hadn’t seen in the main gallery (and we probably missed one after the Georgia O’Keeffe one, too) and a show of “Lynne Drexler, painter” on the second floor. We had never heard of Drexler. She left the New York art scene in the early ’80s and moved full time to Monhegan Island, a small island not too far from Boothbay Harbor. Arlene sometimes looks at paintings and says, “now, that’s PAINT.” I said that about Drexler, and Arlene said, “even more, that’s COLOR.” There was a long video about her showing as part of the exhibit. We watched it all. Possibly the most impressive part was seeing all the canvases that were in the house after Drexler died, and hearing the people talk about taking them outside and sorting through them, with half the people in town (it’s a small island) watching; and seeing the canvases going on the boat to the mainland.

When we got to our car, a children’s theatre Sesame Street production had just got over, and hundreds of families were leaving their spots in the parking garage ahead of us. We crossed the street to the L.L. Bean’s outlet store and ended up getting six pairs of pants at deep markdowns. Back at the garage the line to exit was gone, and we figured that we were probably leaving the garage 15 or 20 minutes later than we would have if we hadn’t been shopping for the previous 30 minutes.
It was quarter to four when we left the parking garage, and we were still an hour from our house. We figured that if there wasn’t power there we’d be able to get back to Newton at a reasonable hour with the gasoline we had, anyway. We were seeing lights on in houses all the way up North Raymond Road, but after West Poland there were a couple of utility trucks on the small road going towards our house. As we got closer to our house, though, we were seeing Christmas decoration lights in many houses. We figured that although people might be operating on backup generator power, they probably would be saving that power for running the heat and water to their houses and maybe a couple of lights, but probably not the decorations; so we were pretty optimistic. When we got to our house, phew! The garage door opener lit up and the door opened.

One reply on “Ice storm”