My mom doesn’t drive these days, since she can’t see well enough. Although there are plenty of people who will drive her to medical appointments, it’s hard to just get out and see friends. One person she wanted to see was Dorothy. The two of them used to go out to lunch at the restaurant in the Holiday Inn regularly. With neither of them driving, they hadn’t got together in a long time. We drove, picked up Dorothy, all had lunch, and took her home. That’s my mom on the right. 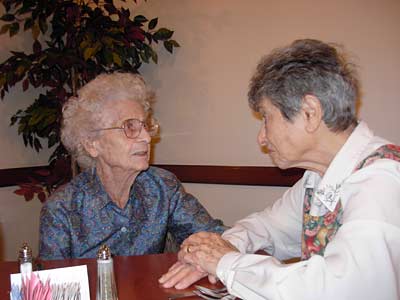 On our way home we stopped in old town Pocatello to see an art exhibit at the Walrus and Carpenter bookstore. A woman has been doing weavings with strips of newspaper for the weft, sometimes with a few carefully chosen words showing to make her point. Besides those, she had done a piece inspired by the troubles of their senator. We had been wondering before the trip what we would hear about the Idaho reaction to the Senator Craig story.

As we walked into the bookstore, we found a string band playing. There were maybe three guitarists and a string bass doing folk music. “Did you bring your guitar?” they asked. “You could join in.” Of course, my guitar was 2000 miles away and I’m way out of practice on it, since I’ve been concentrating on brass instruments for the past 20 years.

We walked to the art gallery area in the back of the shop. The piece about the senator didn’t disappoint us. A photo of him was framed in a toilet seat cover. Above and to the side was a toilet paper roller from which hung a streamer of newspaper clippings like an out-of-control strip of toilet paper: Craig arrested for disorderly conduct, Craig pleads guilty, Craig thinking about resigning, Craig will try to withdraw his plea, Craig won’t resign after all, the whole thing. I sort of wanted to take a picture, but I didn’t think it was OK to take photos in a gallery.

I walked back to the front of the store to listen to the music a little. The bassist had put down the bass viol and started playing the mandolin. “Here, play the bass,” he said to me. “It’s just like the lower four strings of a guitar. Here’s an A chord, this is D, and here’s G.” I’ve never played the string bass before, but I have a high tolerance for making a fool of myself, so I tried. After one song he said, “Not too bad. You got some of the notes right.” 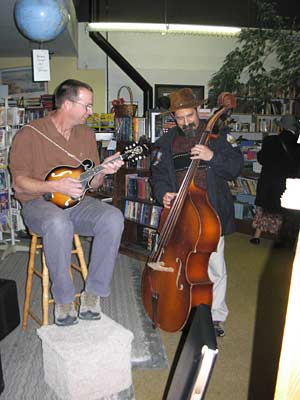 Oh, and how about that hat? I got it at the Fort Hall Trading Post. It’s pre-scratched leather. There’s nothing a Maine blackberry bush can do to it that hasn’t already been done.