Now, that seems like a strange subject for me.

I can’t figure out why, but when I heard his obituary (on NPR no less) a week ago I said, “I think I want to do a memorial postcard for him.” I started looking around the web for images. I found a quote I liked in an obit from a newspaper from Melbourne, Australia and an image I liked, and his name in a big balloony font from a poster. I laser-printed the quote and his dates and carved two eraser stamps (really, soft block printing blocks, from NASCO Saf-T-Kut).

After I had printed up a couple of dozen postcards I posted a message to the erasercut exchange email group offering a card to each of the first dozen people who answered. If I try to post from the wrong email account Yahoo won’t let my message through, so ten minutes after I sent the message I checked my email to see if it had bounced. No! There was already a request for a card.

Requests did not exactly flood in, and in fact I don’t think I got the full dozen requests at all, but I was surprised by how many people out of that small mailing list did say something like “I was always a fan,” or “I had that toy of him on the motorcycle,” or “He was a part of my childhood.”

I’m not really surprised that the eraser carving artists were interested. After all, one of the jobs of an artist is to expand people’s imagination. It seems to me that Knievel did more to expand the American imagination than most artists have.

As with my other carvings, I won’t post a scan of it until the postcards have had a chance to get where they’re going, but check back here in a week or so. Or if you’d like a copy in the mail, email your postal address to me – deanlie at yahoo dot com . Limited time offer, while quantities last (but I might print up a few more if I feel like it).

[added Dec 13: postcards have got as far as Oklahoma City so far. I’m still waiting to hear from any recipient in California before posting the scan.]

[updated Dec 16: It’s more then two weeks since he died. Any longer and it’ll be old old news. Even if some people haven’t got their postcards, it’s time to post the picture. Here you are: 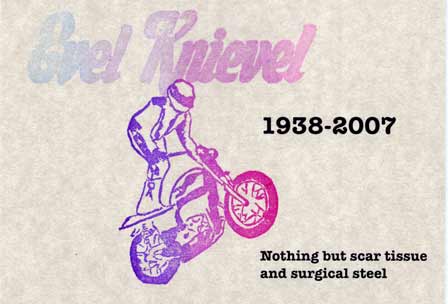 2 replies on “re: Evel Knievel”