Two weekends ago Matt and I drove out to the Red Mill to get lumber for a cover for the fire pit (he felt strongly that e should make an effort to keep the fire pit from filling up with snow.) We were on our way home, between downtown Casco and the house, when his phone rang. “Nope, we’re not going to stop to get what they’re asking for,” he remarked as he reached for it; even the general store in town was in the other direction, and any other grocery store was over five miles behind. But it wasn’t that, but a bird alert. Arlene was calling to say there was a bobwhite under the lilac bush, and that we should park at the bottom of the driveway and walk up quietly if we wanted to see it.

We spotted it when we were halfway up the driveway. I circled around to the back door and got my binoculars to get a good look, and m camera. The bird was amazingly cooperative. Matt hung around the front and took lots and lots of pictures. I took over 50 pictures myself, of which I like these the best: 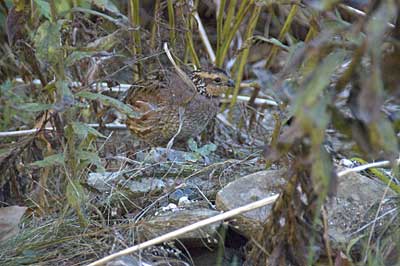 It’s not what you would call a colorful bird, but look at how beautiful the colors are. I especially like those chestnut and white feathers under the wings.

Bobwhites aren’t believed to breed in Maine. We’ve been told that this is probably an escaped bird, possibly from a game farm. We would love for its chicks, grandchicks, and great-grandchicks to grow up on our land, but it’s not likely.